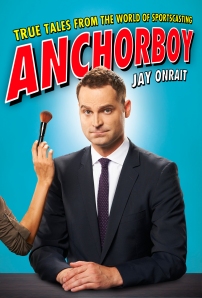 The former TSN Sportscentre anchor and current Fox Sports 1 anchor has a book coming out with HarperCollins Canada. He wrote it all himself and it’s one of the most honest and funny books I’ve worked on.

Nine out of ten people would say Jay Onrait changed Canadian sportscasting. The first nine are right. The tenth just doesn’t get sports.

From the 2011 Gemini Award-winning sportscaster comes a book of essays and stories featuring the rise of a small town prairie boy and his journey to broadcasting in the big city. But, it’s not what you think. These are not tales of triumph, but the stories his fans and viewers have been waiting for.

Anchorboy teaches aspirational sportscasters that if you make enough mistakes you’ll land the right job. It explains Jay’s philosophy on personality-based sports broadcasting and how he changed sportscasting forever. A behind-the-scenes look at what it’s like to work at TSN—it’s a balance of humour, pop culture, and sports.

These are the stories that will make you laugh. Mostly at Jay’s expense.